Cerfs Volants is an installation consisting of 46 kites filling the entire display window of a commercial building. The bridle lines are attached to three main points originating at the window, the kites are further inside guiding the eyes along a visual path.

The multitude of overlapping kites produce an overwhelming effect that makes it almost impossible to distinguish one from the next. The different types of paper used blend together to become one creating a mosaic. They create a screen, a shield of protest, a wall of support. Words and symbols catch the viewer’s eye; are they symbols of hope or a declaration for war? Where are the children? Should they be playing?

The kites of various sizes are built from sticks and branches and covered with found paper, news stories and old protest posters. The chosen materials evoke kites made by children from found material around the world. Some of the kites are painted with china ink where others show current news from these past months. 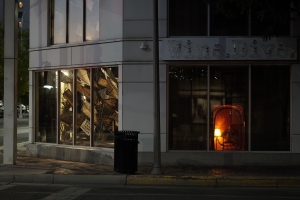